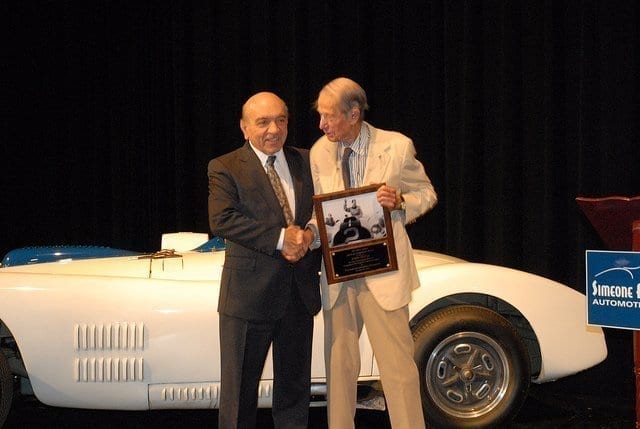 Over 150 guests witnessed legendary racer, WWII fighter pilot and inventor John Fitch being presented with the third “Spirit of Competition” Award, Wednesday, October 20th at the annual dinner at the Simeone Foundation Automotive Museum in Philadelphia. In presenting the award, Executive Director Frederick Simeone noted the “talent, heroism and humanity” that Fitch applied to all facets of his long career. Fitch joins drivers Mario Andretti and Janet Guthrie as a Simeone Museum “Spirit of Competition” Award recipient.

Fitch was introduced by noted racer George Wintersteen, the original owner of the museum’s Corvette Grand Sport. Guests were also treated to an up close look at the new SLS AMG from presenting sponsor Mercedes-Benz USA. Associate sponsor of the event was Hagerty Insurance.

In the course of a driving career that spanned almost two decades, John Fitch won numerous sports car races including the 1953 Sebring 12-hour race in a Cunningham C4R. He competed in the 24 Hours of Le Mans six times, finishing as high as third. Fitch was the only American on the legendary Mercedes-Benz racing team and later served as the first manager for Chevrolet’s Corvette racing team, and the first general manager of the Lime Rock Park race track.

In addition, Fitch emulated his ancestor John Fitch – a steamship pioneer – by inventing many safety innovations for the race track and the highway. The Fitch Barriers – yellow sand-filled barrels – are ubiquitous on America’s highways and have saved countless lives. During WWII, Fitch piloted a P-51 Mustang and was credited with downing a Messerschmitt Me 262 jet before being shot down two months before the end of the war.

“John Fitch has made great contributions to auto racing and auto safety,” commented Dr. Frederick A. Simeone, executive director of the Simeone Foundation Automotive Museum. “Not only was he the first American to compete successfully in Europe in the postwar era, he used his inventive genius to help save lives, both on the track and the highway.”