The Simeone Foundation Automotive Museum will be closed until further notice due to the COVID-19 pandemic.
Photos

Great Britain has produced some of the most legendary sports cars ever, which has long held the imagination of American drivers.

We were happy to see so many British Racing enthusiast including a fair number of British Car Clubs. Over people came out to see some real special cars.

This Demo Day coincided with the “100 Years of Bentley” exhibit that runs from Feb 16th through March 3rd, 2019.

The Demo Day celebrated some of the favorite British Sports Cars from the Simeone Collection, including the 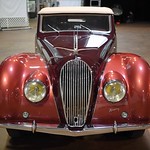