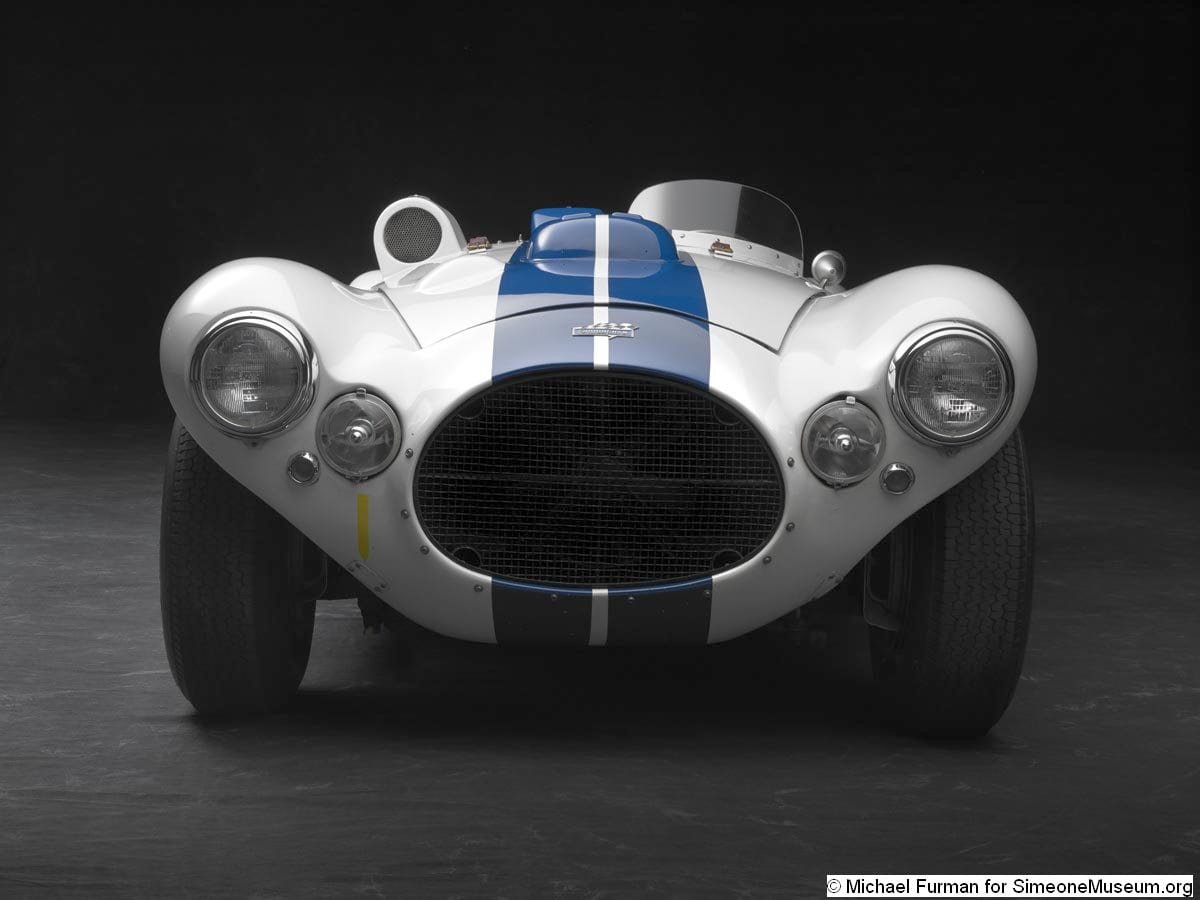 Our car won its class at Le Mans in 1954, the first such victory for an American manufacturer. They manufactured only 2 of these open-top cars ever.

The driving force behind the entire post-war effort, until the emergence of the Ford-backed GT40 venture, was Briggs Cunningham, who entered nine Cunningham racers between 1951 and 1955 in his legendary quest to win the 24-hour Le Mans endurance race with an American car and American drivers’ feet. This accomplishment had not by any sports car, and only once by a Grand Prix car in 1921 by Jimmy Murphy and the famous Duesenberg Le Mans Grand Prix victory.

Briggs himself did not get actively involved in car racing till he was over 40 years of age, although he supported other drivers. On the death of his mother, he finally appeared on the track, driving his famous Bu-Merc. A Buick-Mercedes SSK amalgam, at the first Watkins Glen. He was active in sports car racing for the next 20 years. He entered two Cadillacs in the 1950 Le Mans with no success. Using the experienced help of Phil Walters and Bill Frick, he formed his own company in West Palm Beach, Florida, that produced prototype racers , including the advanced C2R. Combinations of the great Chrysler Hemi FirePower and Cadillac transmissions powered these cars, but despite their 250 horsepower, the best he could place was 18th at Le Mans. There were successes at local races, in 1951 and 1952, however. In order to homologate, he had to produce 25 customer cars (the C3), most of which were clothed with lovely Vignale bodies.

In comparison with previous racing attempts with the C-2 model, the redesigned racer was sixteen inches shorter, 990 pounds lighter, and designated a C-4R (for racing). The car carried a modified Chrysler engine with a roller tappet camshaft, special carburetion, heavier crankshaft, increased compression ratio now capable of 325 horsepower at 5200 RPM. There was a modified Ford front suspension, but the De Dion and rear suspension on the previous models was not carried out in favor of a Chrysler live rear axle. After some experimentation, they used a parallel trailing arm system and bilateral Panhard rods. The car in question after some experimentation ultimately used a four-speed transmission from a Siata truck!

For body design, they brought G. Briggs Weaver on to the team to design the beautiful and functional three C-4R models (two roadsters and one coupe). Briggs Weaver designed the special bodies on the sporting duPont automobiles, two examples of which are in the collection. They fit a huge gas tank behind the seats, capable of 50 gallons. Despite earlier failed attempts at both long-distance and local racing, this beast was now ready to perform.

In all, the three C-4R cars won 74% of all the events in which they were entered, and finished 84% of the races that they had started. As a tribute to its maneuverability, Mercedes Benz engineer Rudolf Uhlenhaut said after test driving a C-4R, “That’s the safest handling racing car I have ever driven.”

This dramatic success in North American racing convinced Briggs that he could win the big one at Le Mans. In 1952, all three C4Rs were entered; two retired, but the third came in fourth place overall. In 1953, three cars finished in the top ten, one of them being a C5R, which came in third. In 1954, our car came in third place and won its class. But his best podium finish was a 1953 victory at Sebring. After this the Chrysler-powered racers succumbed to Cunningham’s desire to be even more competitive with the evolving products from Jaguar, Maserati, and Chevrolet, examples of which he used in his subsequent attacks on Le Mans, but he never got the gold medal.

FAULTY PROVENANCE CURED BY EXAMINATION OF THE OBJECT

In the discussion herein with reference to provenance and examination of the archeology of the car, there is an excellent example in our Cunningham C4R Roadster. The attached advertisement from the October 1954 Road and Track Magazine inserted by Alfred Momo, the race preparers for the Cunningham team shows our car for sale advertised as the 1953 Sebring winner, and also the car that placed third in the 1954 Le Mans race. That car was purchased by great driver Charles Moran, Jr. who raced it in SCCA races in 1955 and 1956 driving with Fred Wacker.

It also participated at Watkins Glenn with Wacker driving and then subsequently it was sold at a April 25, 1970, Parke-Bernet auction. In the auction catalog the car, which is clearly ours identified both by photograph and by the obvious chain of ownership, is also described as being the 1953 Sebring winner driven by Phil Walters and John Fitch. In addition, throughout the car’s subsequent history after getting back on the track, now as a vintage sports car rather than a serious racer as it was in Moran’s hands, it frequently wore the number 57, as the 1953 Sebring winner.

When I purchased the car there seemed to be no doubt of this association and consequently we described it as such initially. However, certain information has come up which of course causes a concern. Now changing from provenance to actual inspection of the object , it appears that the external features of this car do not match the Sebring photographs. When the louvers on the side of the body are counted, there is one less louver on the Sebring winner than on our car. In addition there is a slight variation at the front edge of the front wing where it blends into the front grille section. At the cowl/door junction, there appears to be a different configuration.

All of these variations would favor the car which is currently in the Collier Collection to be the actual Sebring winner. That car seemed to be more successful in races, probably because it ultimately had an engine with the four Weber carburetors which would represent a significant improvement in speed. Data from the Cunningham files shows however, that for Sebring, the engine was probably similar to the four carburetor two inlet manifold Stromberg arrangement which is currently seen on our car.

Serial numbers on these cars have always been an issue. They register the other C4R Roadster as having chassis number 5216 with engine number 5217. Our car has those numbers in reverse. One possibility is that they swapped the engines since we know that engine changes happened in this organization before races.

Based on this information, we no longer take the position that the car in our collection was indeed the 1953 Sebring winner. The data, observable and photographic, indicates it to be chassis number 5217 which did win its class at Le Mans in 1954 and third overall. No American car with an American driver had a better record, since the 1921 Duesenberg victory at Le Mans, in an international race until 1967 when Dan Gurney won Le Mans with his Ford GT 40 Mark IV.

Our car was at the 1970 auction for the estate of driver Charles Moran, who not only raced this car, but was the pilot of the great duPont effort at Le Mans in 1929. The winning bidder at the Moran estate sale was Tiny Gould, a dealer who passed the car on to Warren Collins. The subsequent owner was Henry Faulkner, from whom Robert F. Williams purchased the car in 1983. He took it to various events throughout the country. In addition, he took part in the 1984, 1986, 1987, and 1988 Mille Miglia Retrospectives. In each of these years the car finished, co-driven by such greats as John Fitch in 1988 and Augie Pabst in 1984. They sent the car for a rebuild after that time with intense vigilance over originality. It subsequently appeared both in racing and show events. We gained it in 1990.

Bob Williams and I have a peculiar arrangement with this car. Clearly, his love for the car, his subsequent use of it in a variety of events such as the Colorado Grand, the Le Mans Retrospective, etc. indicate that he has maintained his active interest which was unaltered from before our acquisition until after.

Bob has always respectfully handled the car at choice events throughout much of the almost two decades since we began sharing custody. Although the Foundation is the owner of the car, Bob has maintained it in every possible way, upgrading whatever changes have resulted from his driving whether touring, such as the Colorado Grand, or racing at Laguna Seca. The engine has been completely overhauled by Chris Leydon, and David George has done full race preparation including insertion of clutch, brake parts and any other consumables. As a result of Bob’s part of the custodial arrangement, the car remains in excellent condition.

Of all the Cunningham cars made, certainly  the three C4R’s have given the marque its greatest history and its best performances, including as high as 3rd place at Le Mans. We hope that Briggs Cunningham will continue to be honored in the future, thanks to the efforts of Miles Collier who has most of Briggs cars in his Collier Automotive Museum in Naples, Florida.