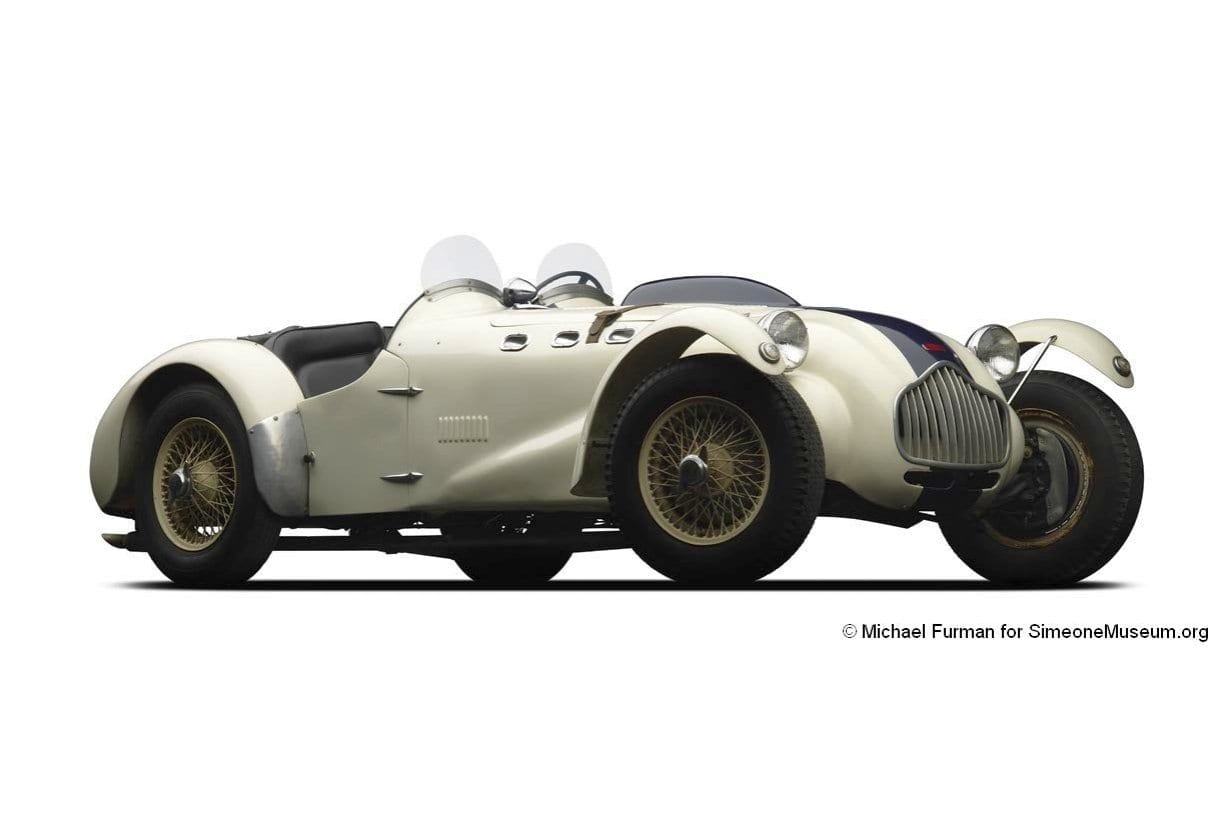 Our car raced at Watkins Glen in 1951-1952 and still has its original 331 Cadillac engine. It is one of the most fearsome handling cars in the entire collection.

Sydney Allard was a Ford dealer in London in the 1930s fond of making specials and had moderate success producing lightweight cars with Ford engines. After the War he believed that the success he had with the pre-war specials might continue post war so he produced the most spartan aluminum body roadster with no attempt at streamlining, and rather awkward cycle fenders which exposed its even more awkward front suspension. He bolted everything on to a plain vanilla ladder frame. By cutting a solid front axle in half in the middle and then forming a pivot at that point, an independent swing axle in front, damped by coil springs, satisfied the definition of an incondite independent front suspension. A De Dion axles in the rear sent power to the wheels through a universal joint drive. Again coil springs were installed, and to lower the unsprung weight they mounted the brakes inboard beside the quick change differential. (As a driver I can tell you this combination often resisted control if speeding up whilst turning).

By the time they designed and produced the car, the old flathead Fords were now superseded by short stroke overhead valve jobs such as the Cadillac V8 or the Chrysler Hemi V8, among others. They shipped the clad frames to North America without motors, and the buyer could add whatever power he wished to produce an undeveloped high speed monster. However, acceleration was fabulous with the Cadillac engine, “0 to 60 in less than 7 seconds and 0 to 100 in 23 seconds.” At 122 miles per hour maximum speed, a daring driver could keep with the likes of the British and Italian sports cars now dominating on racing circuits. But at these speeds the erratic suspension and the often undeveloped power transfer characteristics must have been frightening.

I can only speculate since I never had the nerve to exceed 90 miles an hour in ours.

To their credit, the J2 starred during its brief lifetime. Winning in American road races was common, and a third at Le Mans in 1950 with Sydney Allard at the wheel was its highlight in the international arena. Later versions such as the J2X tried to improve the handling characteristics but by then the highly developed continental cars made them obsolete and they turned out only about 90 J2s and 83 J2Xs. I believe the car qualifies as a significant heavyweight sports racing car because of its design or styling but its success in worrying much more expensive large displacement jobs.

Allard register data on this car reads “Car was ordered with left-hand drive by Perry Fina of New York. Engine installed by Bill Frick. Engine includes special manifolding and carburetors. Perry Fina nameplate on the firewall. The engine mounts to hold Cadillac motor.” Shortly after it arrived to Perry Fina’s shop for his work, Bill Frick installed the 1951 engine. These gentlemen represented the most experienced Allard assemblers in America.

We do not know the early racing history of this car. Based on scant information from the previous owner, it seemed to have taken part at Watkins Glen in 1951 and 1952, with only moderate success. Entry records have a few possibilities, but nothing concrete despite much investigation, so we won’t guess. It has been quiet for 5 decades. We subsequently refurbished the car in 1988 in Ralph Buckley’s shop. The work comprised general maintenance and installation of a fan.

The handling of this car is typical of most J2 Allards. It is awkward, somewhat difficult to control, but powerful on the straights. It took significant experience in order to drive these cars at high speed. Never having mastered its foibles we must trust an account of expert west coast Allard racer, Bill Pollack, for insight and amusement.