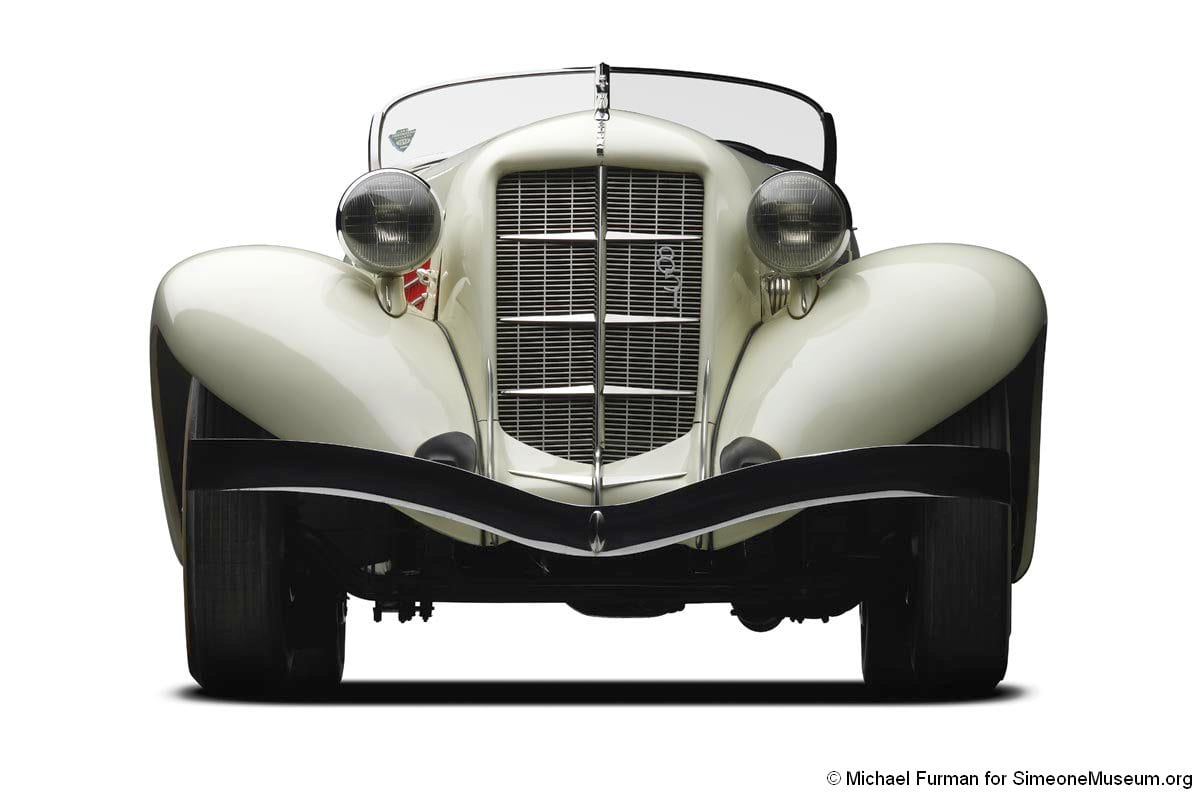 Dr. Simeone’s father Anthony bought this car in the mid-1960s, and it has been in our collection since then. It has traveled only 17,000 miles.

In designing the sporty cars section one realizes that throughout the entire 1930s, there was essentially only one company that attempted to produce a series of two-passenger, extra sporty cars. The Auburn, Cord and Duesenberg firm emphasized performance, good looks, and tried to reach a market which seemed untapped or uninspired. Because the Auburn speedster was basically the most significant choice for an American sports car in the 1930s, we have in the collection the three versions of the speedster, starting in the late 1928 and extending to 1936 with the demise of the company. Auburn Speedsters in their various form, notably the V-12 set stock car records.

An interesting phenomenon evolved about all these callipygian cars which were considered desirable at the time. They appeared in movies with the lovely heiress driving to her Beverly Hills mansion, usually in a white speedster. Every 15-year-old in 1935 lusted for an Auburn speedster. Flash forward 40 years, when he or she had a few dollars, there were no speedsters around so a series of fiberglass replicas, on a modern chassis, were concocted by a variety of small production manufacturers. These did reasonably well, and there are always a few around for sale at any one time. As these 15-year-olds ultimately became septuagenarians, interest in the Auburn speedster lookalikes faded. Beware of the conversions forged from standard Auburn sedans, converted with fiberglass or even metal pointy tails but purported to represent the authentic car. These are easy to detect and Auburn historians or the Auburn-Cord-Duesenberg are available to provide authentication services.

Dad bought this 17,000-mile beauty in the mid-1960s and had always intended to restore it. Nowadays, I would not consider doing such to a well-preserved vehicle. However, the paradigm at the time was 100 point restoration. There is little to say about this car which really has no faults. But as a driver, it has few rewards, however. Big, heavy and with no real sports car feel. The whining supercharger gives a bump to the engine, and these cars were “guaranteed” to go 100 miles an hour.

Each of the Auburn speedsters did, in fact, carry a plaque which implied that they tested the car and made some fractional number over the century mark, but they were not really individually tested. Ab Jenkins took one for a speed trial at Bonneville and successfully proved that performance. In 1935 they advertised the Speedster as “the world’s fastest stock car” as the result of Ab Jenkins January 1st record at Bonneville. Dad completed the restoration to his standards in the 1970s and we have used it periodically since.