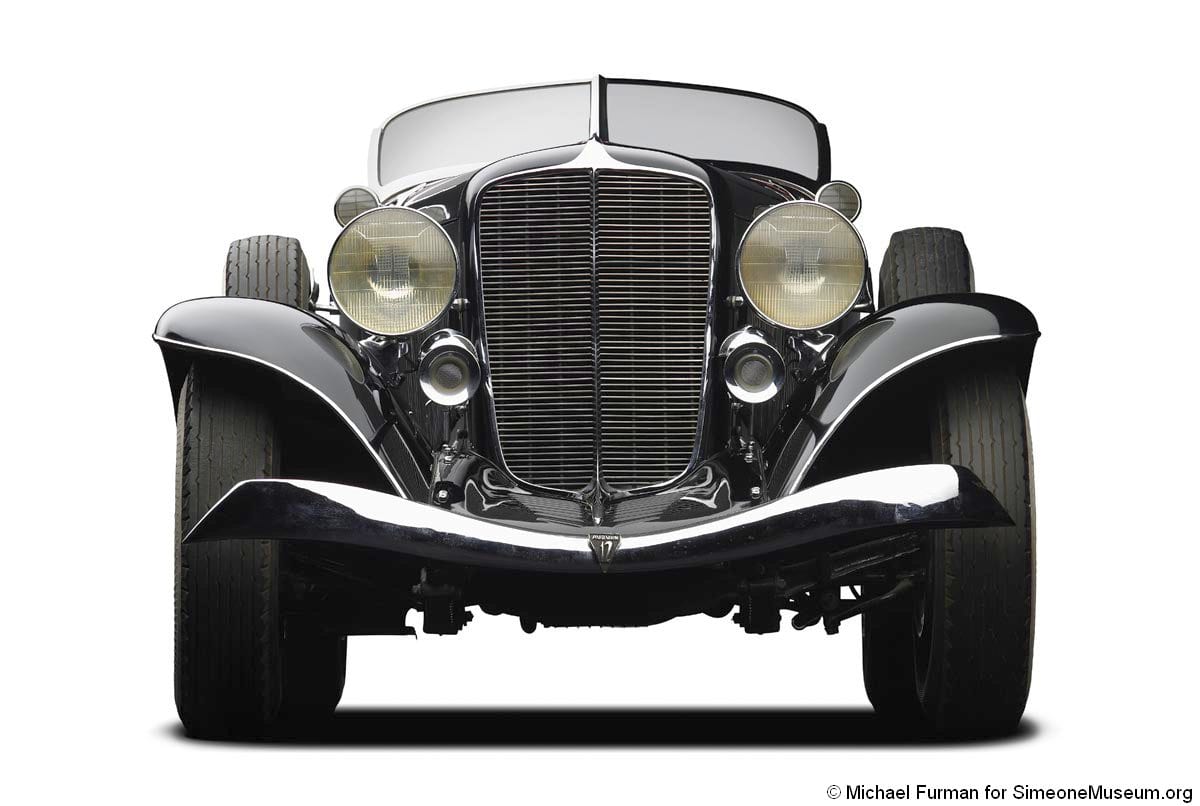 These are the rarest and fastest of Auburn’s speedsters. They only built 14 of these cars, and few remain.

When discussing both a V-12 luxury car, a beautiful landmark design, and a speed record-breaking sports car, it is almost inappropriate to mention selling price. But in fact, in 1932 when the 12-cylinder Auburn became available, its price of $975.00 for the 12-160A model was remarkable. The V-12 cost was less than an ordinary eight cylinder medium range Chrysler product. Would customers believe that inaccurate old saw “you get what you pay for”? Well, something happened because as the company was introducing this reliable and high performing V12, the company lost almost a million dollars. The Auburn 12 offered more than a powerful V12 engine. It had a high cruising speed with a Dual Ratio rear end which, upon command from a dash-mounted lever, would offer either a 4.5 or 3.0 ratio for each of the transmission’s three gears. This reduced strain on the engine and lowered fuel consumption, despite its 6.5 liters and 160 horsepower.

The advertisement showing a Salon speedster identical to ours expresses the speed record it made at Indianapolis of 115 miles per hour and it brags that this average was higher than the winning racecar in the previous Indianapolis 500! Despite that, production in 1933 was down over 80 percent of the previous years and despite building just a few examples, they remained an outstanding sports car, both in beauty, riding comfort and power.

Where would we be without Randy Ema, that Orange, California Auburn-Cord-Duesenberg guru, master restorer, ferreter of great cars and parts, perennial transcontinental visitor to Hershey, and all-around great guy? When we purchased this speedster, its history was unknown. We knew that it was an original Salon model because of the specific structural features which characterized that specific limited production deluxe edition. The car had the strengthening A-frame below, chrome trim on the fenders and louvers, the beautiful bowtie bumper with the V-12 insignia, and the hellishly rare Parabeam head and sidelights. There was too many arguments for it to be a fraud, even though allegedly only 14 of this special, top-of-the-line speedster came online. So we bought the car when we convinced ourselves.

Randy came by, inspected the car, and did a little trick which I suspect he thought I missed. The headlights on the Salon model, apparently used only on this rare version of a rarer make, had lenses which were irreplaceable, so I made plastic copies. While he thought I wasn’t looking, Randy quietly tapped his ring on the lens and the sound told him that this was the correct glass version. From there on he inspected the car completely, then went back to his file and gave us some obscure history. The car first appears in 1946 in Venice, California, where he sent me its photograph, by a Coastal gas station and intact.

It then passes on to a race car driver in San Bernardino, then to Dusty Holland from La Puente, California in 1965, and it stays in California until 1974. After a long gap it appears in the Harvard collection auction in New Hampshire and ultimately comes to us. The car is complete and but needed work re-painted in the colors which we discovered after stripping. We matched the colors of the paint from the factory paint and upholstery brochure for the 12-165 Salon model. The speedster body combination of carmine and black, we had duplicated to be as closely as possible to the original.

The 12-165 production (not sales) of 14 of these cars appears to be accurate and few remain. It requires care to find out, when inspecting one of these cars, that one is not looking at a speedster made from a touring car (with the rear part of the body replicated). Second, it is easy to convert a standard speedster into the more desirable Salon model by adding the special bumpers and trim around the louvers and fenders. However, the front fender line on the Salon model is different, flaring backward in a more sporting fashion. Examining underneath and finding the “A-frame” is crucial.

Of interest on this car are the original Vogue tires of the type we can see matched to the original catalog representation of this model. These are rare, and I have never seen another set. They are unique because of their molded diamond-shaped pattern in the whitewall itself with a relief Vogue insignia, all suggesting a deluxe version of a car that can into this world during the mid-Art Deco period. It doesn’t disappoint on the road, but being a big, heavy, American car, it can’t compare to the perfection of its contemporary European counterparts in the collection.