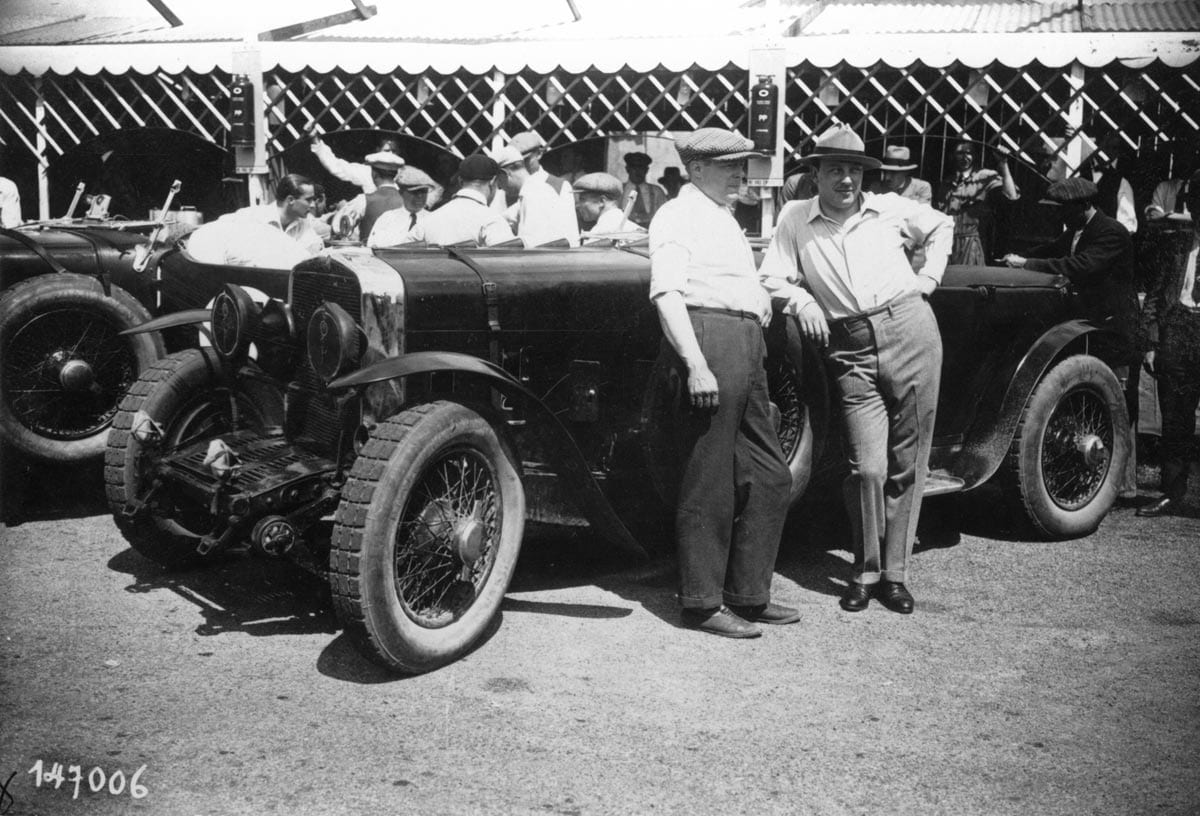 Our car raced at Le Mans in 1929 and led for many hours before retiring. It is the only example of this model still in existence.

The Stutz Motorcar Company was engaged during the early part of its life in sports car racing. As with virtually all American cars, this curtailed somewhat after World War I, but in 1923 Frederick Moskowics joined the company and simultaneously, while developing the concept of a “safety sports car,” he would invigorate the Stutz performance reputation and propel Stutz into the USA-ignored road racing world.

Stutz was one of the few American companies which considered entering the great race at Le Mans – the most significant sports car race in the world before and since that time. In 1928, although sponsored by a French contingent a stock Stutz would come in second in the 24 hours with an average speed of 106.53 miles per hour, truly a remarkable record. This in fact was the best finish for an American-built sports car until 1966 when Ford won Le Mans outright. The single overhead cam Challenger version of the Stutz engine proved both durable and powerful, but its second-place finish to a 4.5 liter Bentley was overshadowed in the 1929 Le Mans race, in which Bentley was entering their new 6.5 liter car.

Stutz had time to develop a supercharger for their new M-series Challenger engine, and they sent three of these blown cars to France. The Paris dealership sponsored one, another by Charles Weyman, and ours by Colonel Warwick Wright, the Stutz concessionaire for England. The Rootes-type supercharger had been mounted aft of the radiator and they had the bodies designed by then-employee Gordon Beurig (later to design the Auburn Speedster, Cord, and others).

Cyril Posthumus realistically analyzed the effect of the supercharger on LeMans performance. “For the 1929 race, three Stutz were entered this time, a new close ration four-speed gearbox had been built, and the single cam engine was enlarged to 5.3 liters, and fitted with a supercharger! The roots type blower was mounted between the front dumb irons, induction pipe linking it with the carburetor, through which it blew in Mercedes Benz style; it also followed Mercedes’ practice in being engaged well by the driver through a control on the dashboard. Blower pressure was only 4psi and in tests at Montlhéry before the 24-hour race, its performance proved disappointing. Brisson and Chiron in the fastest Stutz pushed the car hard to keep up with the Bentleys, keeping the Supercharger in for long spells. The exhaust pipe became red hot, and at the next fuel stop some fuel spilled, the car burst into blame, and eventually, it had to be retired.”

Our car, driven by famous racers George Eyston and Dick Watney, which led for a significant part of the race, ultimately succumbed to a split gas tank and had to retire while in fourth place. Another car, driven by Barron de Rothchild, finished in fifth position behind four Bentleys.

After the race, they shipped the Eyston-Watney car to England and entered the 1929 Tourist Trophy race with the supercharger on board and driven by Dick Watney. The car caught on fire and did not finish the race. Later, the car was purchased by Dr. JD Benjafield, a practicing physician and one of the original “Bentley Boys.” Sadly, the other two cars appear to have been destroyed.

Much of the subsequent history is secondhand but presumed to be accurate. Dr. Benjafield sold the car to a wealthy Cambridge undergraduate. This individual ultimately became a Spitfire pilot. While off-duty he met his girlfriend at the White Heart Hotel somewhere near Saffron-Walden in England. The car stayed at the hotel for unknown reasons, perhaps because the young owner had been killed in a dogfight. The Stutz reposed in the hotel possibly as part of the assets to cover unpaid bills. There was an auction at Saffron Walden, of which included objects apparently owned by the hotel. Besides old tractors and trucks, they included the Stutz.

A farmer bought the car at this auction in 1946 in a totally original condition. The farmer refused to sell, but later collector and car-restorer Paul Grist, convinced the farmer to sell the car after he concluded that it was in fact a team car. He found seals on the oil filter neck and on the reserve tank, and on the gas tank. The car also had double fuel lines they wrapped which in asbestos. We found charred wood under the body near the gas tank. The wood behind the body was original, though also charred. There was a tussle between Paul Grist and another dealer over who should buy the car but Grist prevailed. Grist told me it delighted him when he considered the completeness of the car although it had deteriorated in some ways.

The most significant abnormality was a Bedford truck transmission we later replaced which with an original four-speed Stutz unit such as the car was born with. In a conversation with Grist, he pointed out it pleased him that the car had right-hand drive, which was rare among the Stutz cars. He noted that all fittings were the racing type. He noticed that there were air ducts for the rear shock absorbers and an air pump. He found additional instruments such as a racing tachometer. Remarkably, the pointed fuel tank was still intact.

Grist organized the car, but when the news reached America, Bill Harrah had to have it. He photographed it on arrival to the United States with the typical Harrah “mug shots” and then completed the usual meticulous Harrah restoration. It was apparently one of the collection’s favorites because they had not offered it for sale at the big Harrah Holiday Inn auctions. It was purchased as part of a separate group of special cars by Colonel William Lyons. I had asked about the car and with the help of Ken Gooding, I could trade my DV-32 Stutz Super Bearcat plus some cash for the Le Mans car, a trade I never regretted.

They wrote this storied car up multiple times in various contemporary British and American journals. Stutz historian Norman Baars has accumulated a stack of articles about these cars, which have been very helpful in authenticating its storied past. Fortunately, much material was available to Harrah as well during the restoration, and their accuracy is remarkable. A 1929 Motorsports advertisement shows the car when it was available for sale by Warwick Wright and the car today appears identical to the photo.