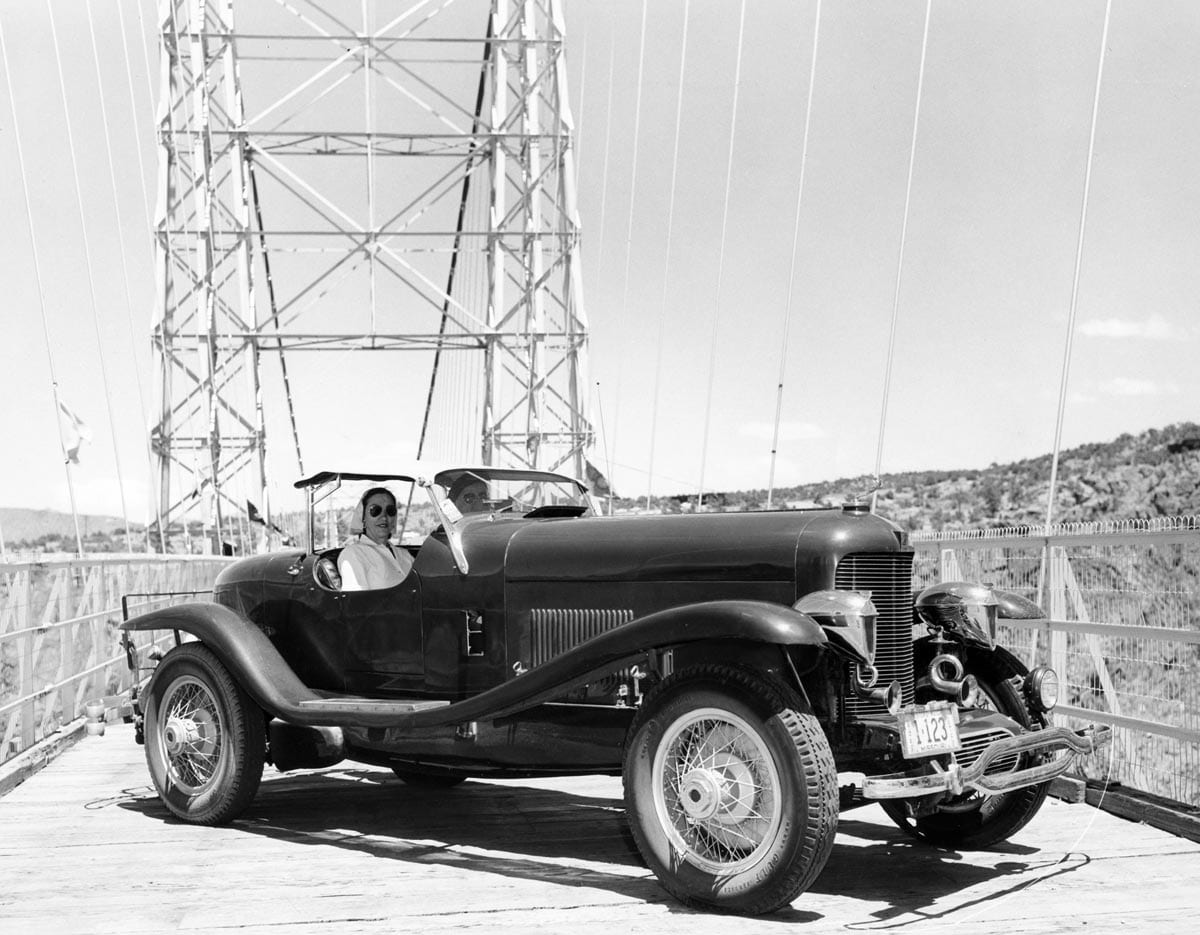 Our car was owned by aviators and lived a very interesting life. It is in unrestored, original condition, and only 6 are known to still exist.

The history of the Model G DuPont has already been discussed with the four-passenger car of similar chassis in the “Americans at Le Mans” section. From a mechanical viewpoint and driver’s experience, there is an insufficient difference between the two cars to comment.

This car is essential in the study of American sporty cars of the ’20s and ’30s because there are so few examples of any make. Certainly, the major automakers were not making anything which could seriously be called a performance car, a car where speed and style and a two-passenger configuration was the principal concern. Rather, all of the major manufacturers, at best, could produce a roadster, which was invariably on a standard chassis, most of the time looking quite dowdy, like a two-passenger version of the standard model, but never with the concept that it could be involved in any type of amateur or professional racing.

The two-passenger speedster was introduced at the 1929 New York Auto Show. The advertisement that was shown clearly depicts a car such as ours, of which perhaps only 7 were made. The amazing thing about this car is that, although it’s a two-passenger speedster built for speed, the chassis length, size, and weight are nevertheless similar to that used on the other cars, indicating that the company relied on the sheer power of its engine to profess sporting performance. Produced in such limited numbers, they were obviously not big sellers, and as mentioned earlier, the luxury Model G range of which more DuPonts were sold than any other model, was stifled by the advent of the Great Depression. To those lucky few who had these cars, however, their charm and distinctive styling set them apart from the other boring choices available by the late 1920s.

The most that can be said for DuPont at this point is they used a strong chassis, a powerful Continental engine, Warner gearbox, Columbia rear, Stewart-Warner instruments, Woodlite lamps and a package of mostly proprietary stuff, but clothed with some very exciting speedster bodies which shouted speed and sport. For this accomplishment, they certainly should get credit from those of us who honor the serious attempts to make a competitive sporty car.

This two passenger Speedster was finished on June 25, 1929 for Stafford Lambert, for whose family Lambert – St. Louis International Airport is named. Stafford Lambert cut a dashing figure. He was an aviator and former President of the Lambert Engineering Company. He flew airplane stunts with Charles Lindbergh, dated Elizabeth Taylor, and went skeet shooting with President Dwight Eisenhower. At age 19, he became the youngest licensed transport pilot in St. Louis. He survived eight plane crashes with only minor injuries and was a test pilot for the U. S. Air National Guard. He served with the Navy during World War II. It is most fitting that a dashing figure such as Lambert would want a dramatically exciting car like the DuPont two passenger Speedster. The existence of this car is unknown. The original build sheet shows that the car is essentially as presented. This is probably because most of its life, it was spent in a heated-air conditioned air hangar in St. Louis.

A two passenger speedster identical to this, Serial Number G829, in the identical color (Bon Soir Gray) was delivered to Douglas Fairbanks, Jr. at the Fairbanks and Pickford Studios on May 22, 1929.

The next owner, Michael Rumsey, friend of Lambert, cherished the car for decades, and it was from his estate that the car was eventually purchased. The lawyer representing the estate indicated that the car had never been taken apart or restored and he believed, in fact, that the paint was original. It was called bon soir gray on the factory papers. The quality of the preservation of this paint, however, seems too good, although it is clear that the car has never been taken apart. The original spring gaitors, upholstery, and understructure are clearly untouched. The build sheet also confirms that the car was delivered with those bizarre Woodlite headlights, front dust shields and splashers, and black leather upholstery

The Rumseys used it regularly and kept it in excellent condition for almost 70 years and he kept an accurate logbook. The car never needed any major repairs, although it has a three speed Warner gearbox, whereas the original build sheet indicates that it left the factory with a four speed gearbox. Certainly, some of the interior black leather is original. It runs flawlessly and Lambert or Rumsey made only a few alterations, including the addition of an altimeter on the cast aluminum dashboard. The long rear tail encloses a spare tire and still has its original lining replete with a fug, which only time can generate. The bumpers were non-original and they were removed anyway for our exhibition purposes, but the original bumpers are available should they ever have to be reinstalled. Even Rumsey’s air whistle functions on cue.

Mrs. Rumsey was an octogenarian Cessna pilot! It seems as though the Rumseys were always around planes when Mr. Rumsey was not driving his Speedster. At present, six two passenger speedsters are known, three of which have the long boat-tailed body such as this car.

Some additional history on Mr. Michael Rumsey, III: His family owned goldmines in the Southwest and they were the main distributors out there for Winchester firearms in the 1800s. Mr. Rumsey had a large gun collection. Mrs. Rumsey, at the time of my correspondence with the family attorney in 1998, was recently deceased. She was the oldest World War II pilot in the United States, in fact she flew Mustangs in the second World War! After Mr. Rumsey died, she kept the car and maintained it until her death. The attorney was instructed to keep the car in a heated, air-conditioned, dehumidified garage and the car was never outside in the rain.