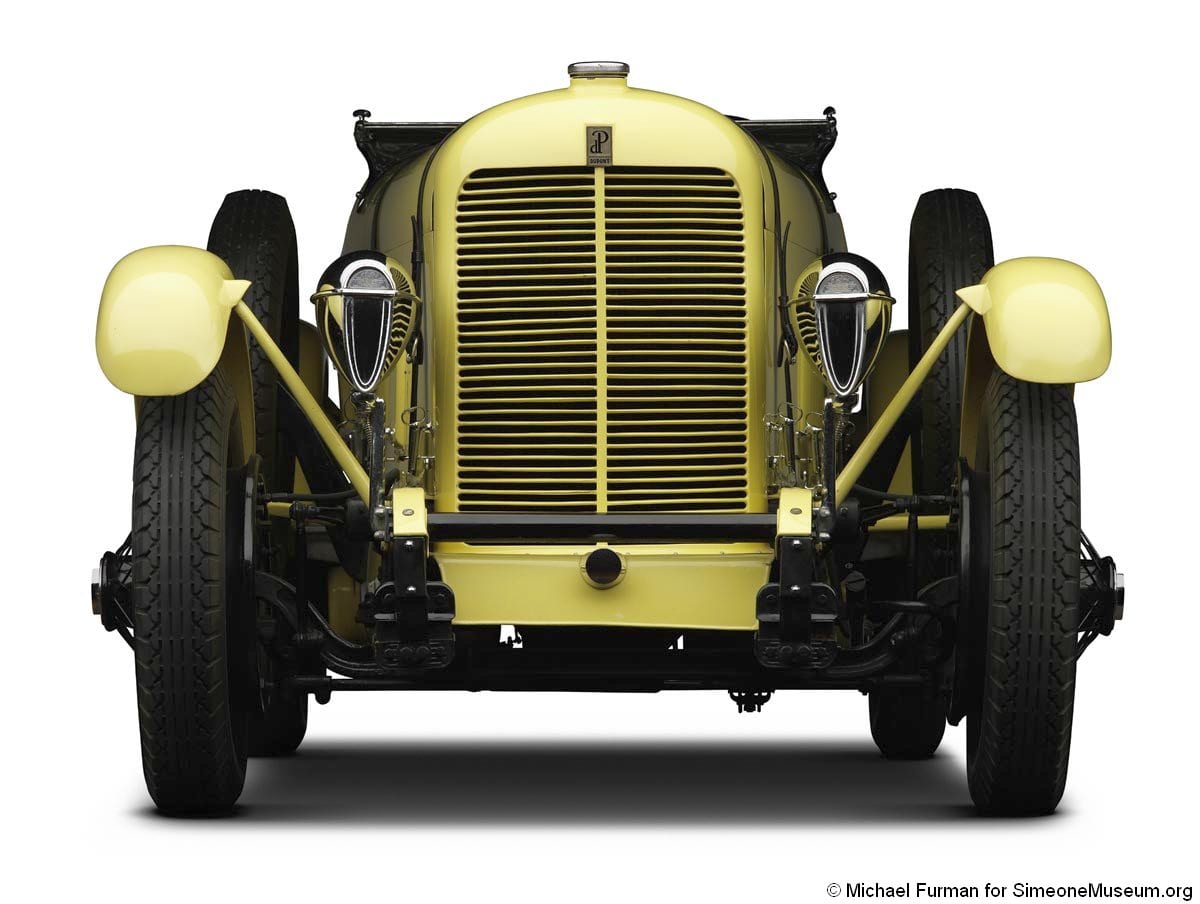 The duPont factory made this car to replicate their 1929 Le Mans entrant, which nearly won the race. Only 3 of these cars still exist.

The Motor Manufacturing Company was formed by E. Paul of Wilmington, Delaware, just after World War I, starting out at first by building marine engines. In 1919, their Model A came out and subsequently a series of luxury versions, with the highlight being the Model G, first built in the late 1920s. By far the most luxurious and the most popular of all the series was the Model Gs, of which they made 273 in all. Powered by a 322 cubic inch Continental engine, they developing 125 horsepower at 3200 RPM. A variety of companies, made bodies to the order of the customer. A favorite was the Merrimac Body Company from the north shore of Boston, who made a variety of chassis for luxury cars and clothed, virtually all the rare two- and four-passenger speedsters.

E. Paul duPont, his young friend, Charles Moran, and dealer Alfredo J. Miranda, Jr., were all interested in competition. The Model G two-passenger speedsters had limited experience in some trials and so the group decided to enter two cars for the 1929 Le Mans Race. This required special four-passenger open bodies, later designed by Mr. Briggs Weaver and made by the Merrimac Body Company.

They entered two cars, but only one would take part. With some modifications, such as Rudge-Whitworth wheels, Dunlop tires, Champion spark plugs, they were otherwise “stock” four-passenger speedsters. This 1929 effort was remarkable because not since 1921 when the Duesenberg Brothers won a Grand Prix at Le Mans, did an American car with American drivers take part in Le Mans. In the 30s, Miles Collier tried, but with an MG auto, and in the 50s, Briggs Cunningham tried several times with Cadillacs, cars of his own making, and a variety of foreign racecars. Finally, in 1966, an American Ford GT40 MK II, won with British drivers, and in 1967 the ultimate occurred when an American car won with American drivers (Dan Gurney, A. J. Foyt).

Years later, the auto was carefully restored and appeared proudly on the cover of The Antique Automobile. The owner used the car regularly, along with his sons, and brought it to several shows in the Delaware Valley where it was always popular.

On reviewing the car there have been very little modifications. The car is intact in every way. The brakes are larger than standard and appear to be modified to help this heavy car to stop on time. The car runs perfectly, and it makes an interesting addition to our “Americans at Le Mans” Exhibit.