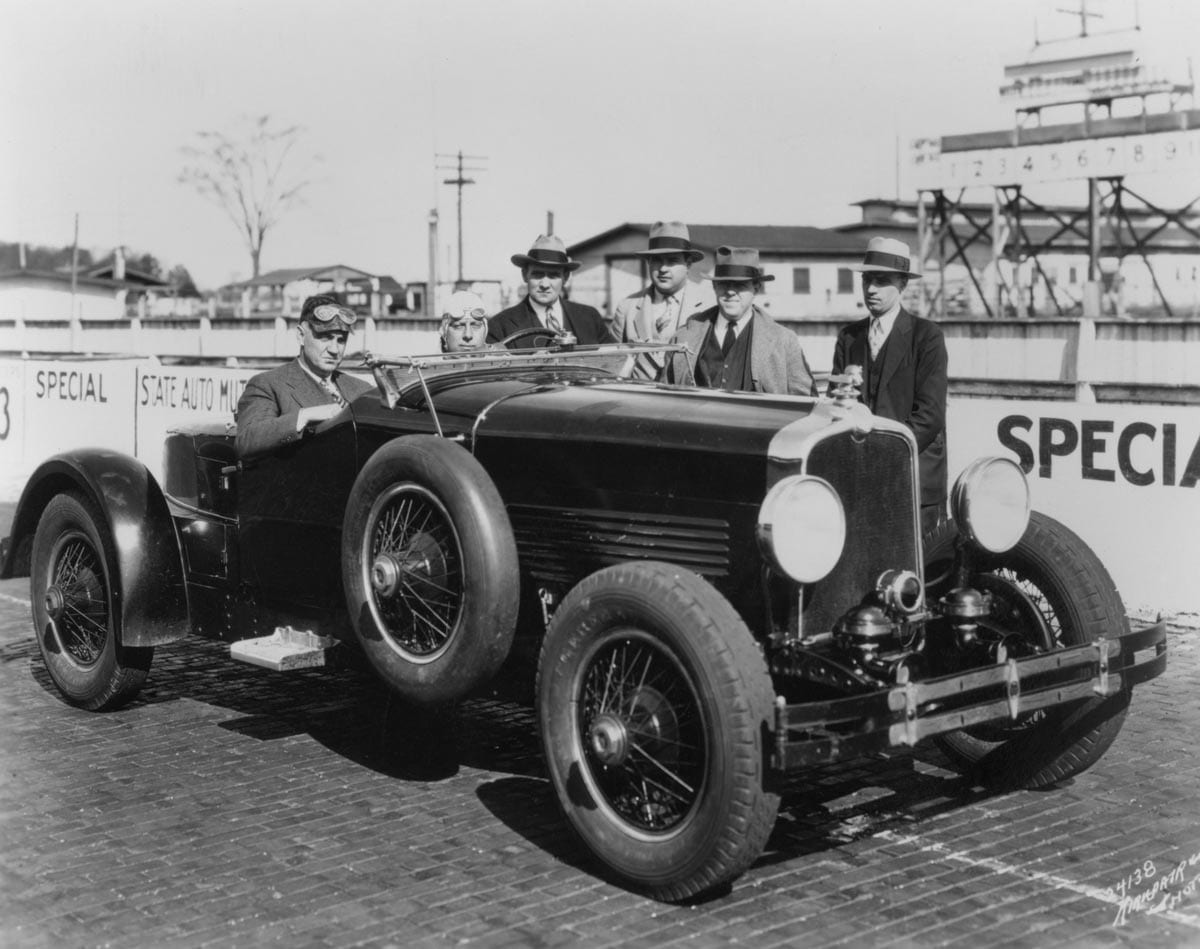 The Black Hawk was America’s stock car speed champion of the late 1920s. Our car is a genuine “barn find” in original, unrestored condition.

By the early 1920s, Stutz had stopped making serious sports cars, nor was it particularly involved in competition. The public, apparently, still had lost the memory of the “Bearcat” type of car.

In 1926, Fred Moskovics took control of Stutz and made plans for a “safety” car, but also geared up for a true American sports car. With his engineers, he developed the “Challenger” Black Hawk engine. With this engine and a special chassis, by 1927, Moskovics planned to concentrate on American stock car racing using his two passenger speedster. They made a four passenger speedster as well, we presume that they meant this to be a candidate for Le Mans honor.

After a rocky race season start, in 1928 the Stutz showed its mettle in stock car racing. It won race after race after race. When the Black Hawk with the Challenger engine got into production, it entered and won and every AAA stock car race they held and without exception, every Stutz that started finished! A serious challenge by the Auburn 8-88 Speedster succumbed to Moscovis efforts with its new engine. In a country where serious stock car racing had been ignored since the end of World War I, that the Challenger Black Hawk made such an effort and was so successful against other lesser powered, but still admirable stock cars, was taken notice of by international admirers.

By 1928, they destined the Stutz to race overseas at Le Mans, but with serious support from its French and English drivers. The July 4, 1927 Rockingham Stock Car Race was the beginning of a turning point. The newly designed Challenger engine was not yet ready, but someone interested the AAA in having Stutz take part in this race in view of the few serious contestants. One must remember that except for Auburn and perhaps Paige, high performance stock cars were not part of the American auto industry’s agenda. Moskovics was not ready, but he suggested that a Mercedes Benz model K to be driven by his ace Frank Lockhart to add excitement. Lockhart performed admirably but in the end, the 8-88 Auburn barley eked a victory with a stock car record averaging 89.17 mph for the 100 mile race.

Later that month the Challenger engine was in production but was soon discovered that the newer Auburn was capable of 95 mph. Consequently, special pistons higher compression ratios and differential gear options to the specialized worm system with nine ratios were available for the Black Hawks. Souped up to the max, these cars were capable of 100 mph but with the sacrifice of some reliability. With the AAA encouragement, a 150 mile race was held at Rockingham on September 7, 1927, with now three of the new two passenger Black Hawk speedsters ready for battle, their competition in addition to the usual entries being a new 106 horsepower Packard and a Duesenberg Model A Roadster.

The beautiful boattail Stutz lead from the beginning and within the first ten miles two of them had lapped the fourth fastest car in the race, an Auburn driven by Ralph Hepburn. This was a Stutz 1-2-3-victory and mainly, with a winning average of 96.30 mph which broke all stock car records from 25 to 150 miles per hour. Simultaneously, the two passenger Challengers were winning at Pike’s Peak. At the Charlotte Speedway, Stutz won the first stock car race ever held there averaging 94.24 mph, further remarkable for its great reliability.

Road racing in America then was virtually nonexistent, a fact which continues to befuddle auto historians. When a car was ordered by a wealthy Mexican sportsman, the concept was fascinating to Moscovics who really could not assess the relative reliability of his Black Hawk in a true road race where suspensions, accurate steering, and irregular road surfaces offered different challenges than oval stock car venues. The untested road holding qualities of the Stutz Black Hawk prevailed in Mexico and a victory on September 25, 1927 paved the way for the concept that this chassis could handle European road racing… perhaps Le Mans?

The early history of this car is well-documented with one owner. They knew it to be in A. K. Miller’s hands shortly before World War II, perhaps left there by a GI. The winged decal, with the initials W. P. B., remains in excellent condition on each door. Miller’s pictures from the 1940s show the car essentially as we find it today. The top was always up and remains in good condition although we removed it for the Match Race exhibition. When I initially saw the car, it was remarkably complete, down to every detail. It had original upholstery, original carpets, even the original firewall asbestos. The dash and all the external features were untouched. Unfortunately, however, it was red! Certainly no Black Hawk ever left the factory red. However, the red paint was poorly painted and hastily applied. There was no primer. The adhesion of the paint was poor. In fact, in some places, the red paint was flaking off, and the factory applied black paint was remarkably in good condition.

Dave George blessed the car and, we purchased it at the A. K. Miller auction in Vermont. When the car came to David’s shop, he inventoried it, cleaned out some mouse droppings from the boat tail, and reviewed the car for authenticity. We needed nothing! When we attempted to run the car, the venturi of the Zenith updraft had decomposed, a problem not infrequent with this die cast part. David could replace the parts necessary to make the carburetor functional.

He then set about a remarkable task of preservation. Using a combination of a heat gun, air pressure and careful pick-and- pick handiwork, he removed all the red paint. In most places, the original black paint was in excellent condition. There were spots, such as the front apron which needed to be painted and we touched the black bumpers up. We filled other areas in, but I would estimate that the vast majority of the original paint was intact.

David got the car running properly with little delving into the mechanical parts. In its current condition, it still shows significant signs of wear. There is paint that is worn off the door tops by the elbows of the driver and his passenger. There are heavy pebble chips on the front edge of both rear fenders. But, remarkably, the plating on the headlights and radiator cowl was unpitted and virtually new! We left the worn tires in place because they match the rest of the job and realized that this was essentially an exact sister car to those stock cars which raced so successfully, without being beaten, in the stock car seasons of the late 20s, and a duplicate of the Stutz in the most famous Match Race.