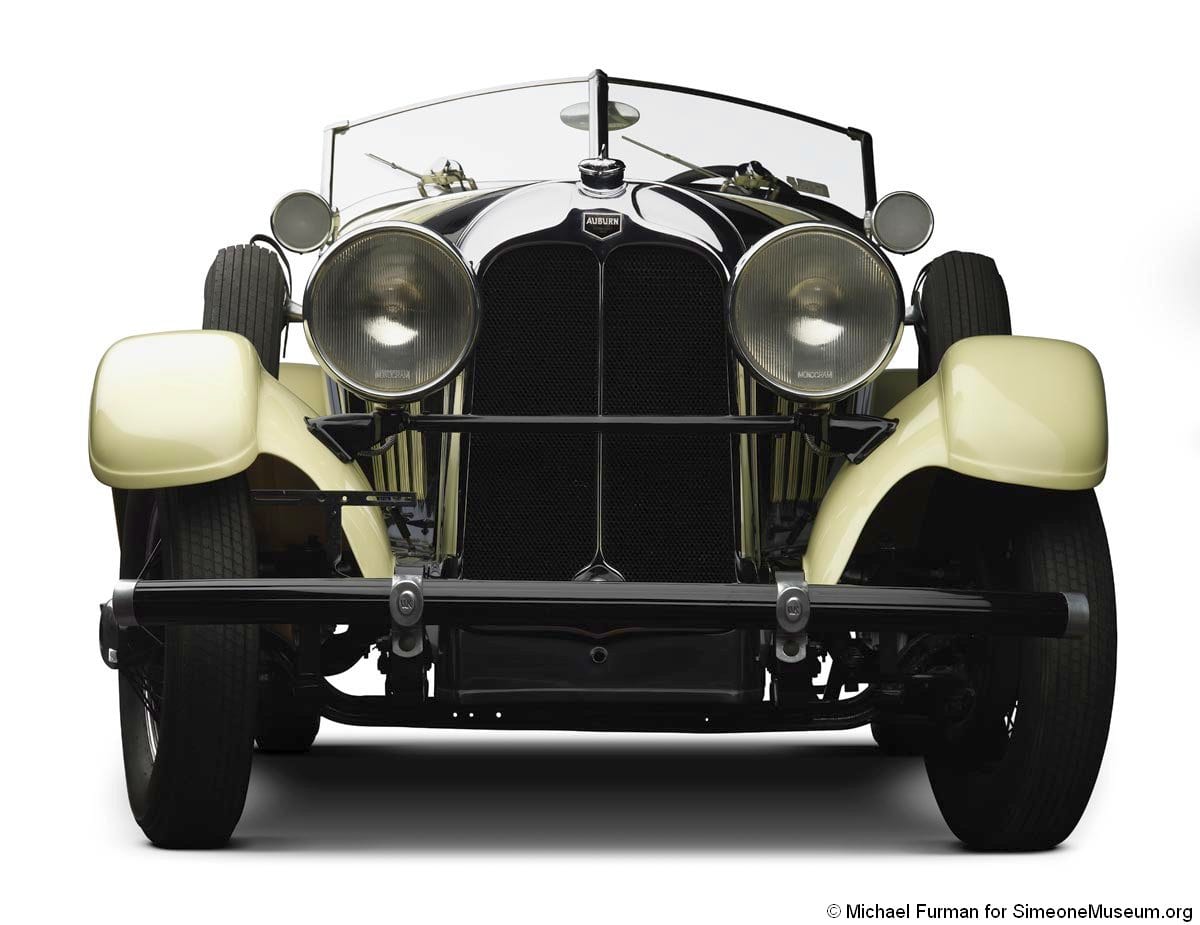 This car was the first of Auburn’s legendary Boat Tail Speedsters. It was one of the few sporting cars available during this time period.

According to authority Griffith Borgeson in Errett Lobban Cord: His Empire, His Motor Cars: Auburn, Cord, Duesenberg, “Unlike later speedsters, models from the 1928-30 period differed from standard Auburn’s in important technical respects, having higher transmission and differential gear ratios, different carburations and distributors. It was intended that the speedster’s performance should be comparable to that of the most powerful automobiles of the day with a potential speed of 100 mph. Although the greatest number of speedsters was constructed between 1928 and 1930, few representatives of these years have survived. The combination of wooden framework and a tapering point whose seams were covered with a molding invited dry rot and by the later 1930s most remaining speedsters were in so rough a condition that they were scrapped. Others were heavily modified within a short time of their initial purchase.”

RACING AND THE AUBURN SPEEDSTER

Borgeson in the same volume describes the beginnings of the Auburn speedster’s racing heritage. Wade Morton, a cultured racing driver who promoted and distributed the undertaking of a relatively professional set of record attempts up to 1000 miles brought an 8-88 to the shop of Eddie Miller to have it turned for speed. “It took a lot of testing to get everything right,” Eddie remembered well. “The cylinder head studs used to stretch and break. So he installed oversized studs in a very good steel. The valves, valve springs and keepers were particularly fallible at high revs and had to be completely revised.” No doubt he poured over it and polished the engine and gave it all the finishing touches that are known to the average speed tuner.

On March 18, 1927 Morton set a new 1000 mile record for American stock cars with an average of 68.37 mph. The national dealer organization, taken by surprise, was euphoric. Stutz, which cultivated a reputation in being the fastest American production car, retaliated on April 4 with a 24 hour marathon run on the Indianapolis Speedway. The car covered 1642 miles with an average of 68.4 miles per hour, for a record and possession of the Stevens Challenge trophy.

This competition spurred a challenge to go racing at Atlantic City. The great race was a 75 miler on the 1.5 mile Atlantic City board oval. Eddie went on, “The Stutzes were really modern cars with overhead cam engines and they had Tom Rooney, Gil Anderson and a bunch of top stars from the old Stutz racing team, old men who could hardly walk. They were out there for the glory of Stutz and nobody had ever heard of Auburn. Morton had a well broken in roadster and I had a new one. He was about a mile and a half an hour faster than I was and about a mile slower than the Stutzes which cost over twice as much money. We were as fast as a little Duesie which would do around 90 and cost a bundle. This was the beginning of stock car races on the speedway at the time and made a big hit with the public. They didn’t know that you could hardly go fast enough to stay up with the big banks. You had to be a hell of an expert to stay up there and ride so that if anybody got in a jam and you had to slow down you would know what to do instantly. As it was, two of the Stutzes were wrecked.”

The winner was Tom Rooney’s Stutz with a searing average of 86.24 mph. But the huge crowd on its feet and cheering wildly as he crossed the finish line barely a nose ahead of Wade’s 8-88 roadster which officials at the AAA timed as only a fifth of a second slower. The consequent photo finish provided E.L. Cord and his publicity expert with all they could ask for in the way of raw material for an international advertising campaign which laid the foundations for a new, performance oriented Auburn image.

Buoyed by their success, Wade later won the 100 miler AAA stock car race at Salem on July 4 against a field of interesting cars including Frank Lockhart and his supercharged Mercedes. After that Miller reported, “We challenge anybody anywhere with our couple of Auburns: Pike’s Peak, Daytona Beach, Atlantic City, L.A. or anywhere else.” This led to a boom in sales, applications for dealerships, and a series of racing successes in which the 8-88 continued to perform admirably, particularly when its size and cost factored into consideration.

I thought it was important to have all three versions of the Auburn Speedster because, frankly, during the eight years od their production they represented virtually the only American made sporty cars one could buy. There were a few Kissel Speedsters the very rare Dupont Speedster which started in the late-1920s, of which only a handful were even put on the road, and the famous Stutz Black Hawk, a pretty boat-tailed car with great performance which usually beat the Auburns but cost twice the price.

I always liked the 8-88 over the others of the first iteration of the Speedster because it was on the short 125-inch wheelbase which better fits its design. As on the larger versions, the 8-115 and the 8-120, the extension of the rear behind the doors to accommodate the larger wheel base seemed to set the proportions wonky. An 8-88 was on the hit list.

It turns out that an antique dealer not far away advertised such a car. We visited a shop and soon we had a deal on the table. The car was basically an older restoration, still with some original paint. It had a black body and orange fenders. The black paint seemed to be in good shape. The upholstery, dash, and all the trim was original and unrestored. The bar bumpers, slats cover the gas tank were all in good shape. Under the hood the engine appeared to be all original though painted later, as was the firewall.

To get history and verification of the car I went to Auburn-Cord-Duesenberg historian and guru, Randy Ema, keeper of all the records of these cars from new and through the subsequent litany of owners, and he provided me with definite information. He could trace the car back as a collector car to the 1950s when it had previously been owned by Leonard Peterson of Rockford, Illinois.

Dave George did his usual job of getting it whole and fortunately he did not have to deal with the instruments, upholstery, or other parts of the car which seemed in good shape, possibly original. Since then we have used it some and find it to be a comfortable, but not a car I would expect to compete in sports racing events because of its heavy nature and slow steering.