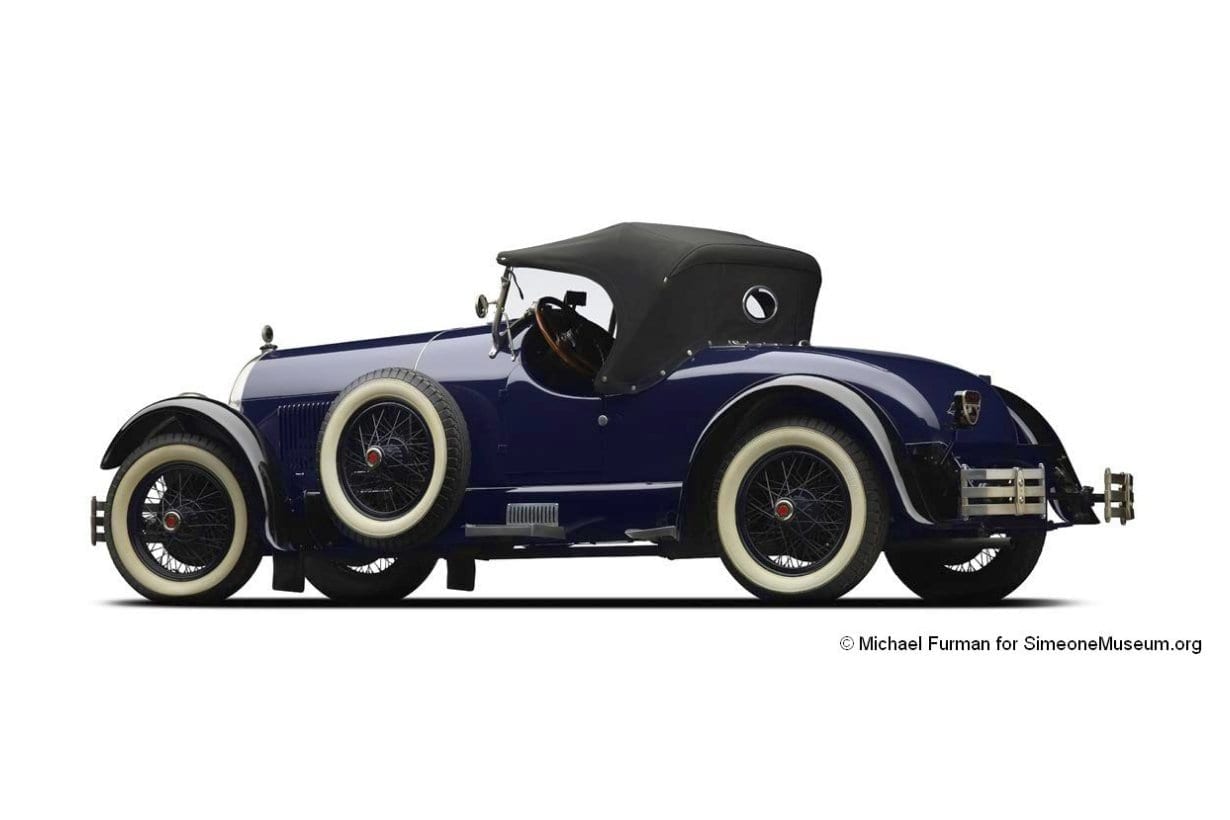 This “sheep in wolf’s clothing” has the looks, but its mundane performance betrays its sporting appearance.

The Kissel Speedster is what we, in modern times, call an “eyeball car.” That means it is a car that looks better than it performs. I call ours, sometimes, a sheep in wolf’s clothing. Although solidly built by a reputable company in the manner of German craftsmanship, this heavy car boasted a conventional 75-horsepower engine, which propelled it with modest verve, but not in keeping with its sporty good looks. Nevertheless, the cycle fenders, golf bag carrier, and cut-down door made it charming enough to be owned by Amelia Earhart, Douglas Fairbanks, Jack Dempsey, and other notables. In 1926 the conventional engine was a flathead eight with (aluminum) pistons, Warner running gear proprietary .

There is really nothing else to say about the car mechanically. The turning radius is poor, the steering is heavy, the limpid pickup is sometimes mollified by the exhaust note when the cutout is open, but beyond this there’s only the exciting, sporty good looks. But then what was there in 1926 for sportsmen? The Auburn Speedster had not arrived. The Paige Daytona Speedster was gone, and all the other American car manufacturers were making routine roadsters of singularly lackluster appearance. As a result, the Kissel Speedster was the “it” car, as they said at the time. Because access to sporty European cars was scant, servicing possibilities few if one happened to import one, the Kissel represented a sporty compromise in the mid-1920’s.

I recall looking through a Fawcett-produced old cars book, which, along with the negligibly edited Floyd Clymer publications offered minimal information, but they were what we had in the 50s. There was a picture of a wonderful Kissel Speedster owned by a Claude Cato somewhere in Texas. That’s all I remember.  model was the prettiest of the bunch, as far as it concerned me. It still had the shapely cathedral radiator and bonnet and their pretty domed headlights, not like the military-looking drum lights of the previous year; and it did not have the rather boring, conventional appearance of the subsequent years.

It turns out that Cato’s car ended up in Danbury, Connecticut, where I could buy it. By that time, unfortunately Dad had passed. He always loved the Kissel for the reasons just mentioned, but he never hoped to get a speedster such as this, although, while alive, he found a 6-cylinder “enclosed speedster,” which he could never afford to finish.

The car was originally dark blue with black fenders. The Kissel Company described the color on our car as “Rolls-Royce blue” in their literature, and that’s how we have it finished today. She appears in our sporty car venue because if you’re interested in American sports cars of the mid-1920s, this is one of your few real choices. Two years later, Stutz brought out the Black Hawk Speedster, and Auburn introduced the first iteration of its famous boattail, which ran for eight years thereafter.