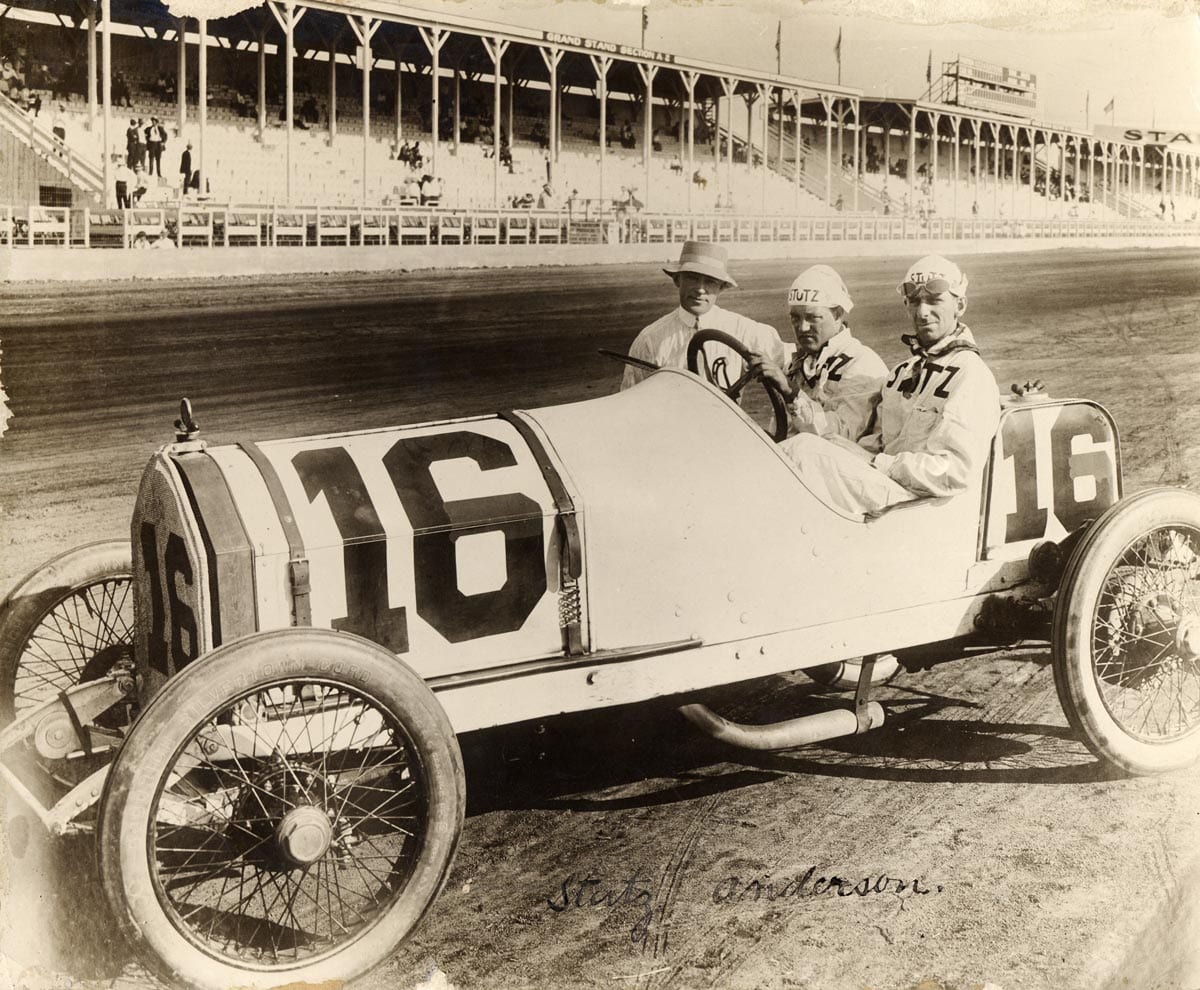 “The car that made good in a day” at the 1911 Indianapolis 500. This car was restored by our Curator Kevin Kelly.

he newly formed Stutz Company made its racing debut at the first Indianapolis 500 on May 10th, 1911 where it placed 11th “without a single mechanical adjustment averaging 62 3/8 miles per hour for 500 miles.” Proud of this achievement their slogan “the car that made good for a day” lasted for several years. Their subsequent racing record was dramatic and in 1911 and 1912 they performed well in many of the many races held at Fairmount Park, Santa Monica, Bakersfield, San Jose, Belmont Park, Elgin, Brighton Beach and the Vanderbilt Cup to mention just a few. They placed 4th and 6th in the 1912 Indianapolis. Initially powered by a 50 horsepower Wisconsin engine in 1913 they introduced a bigger six-cylinder motor, but this was not competitive.

For the 1915 racing season the Automobile Association of America reduced the engine capacity limits from 7.3 liters to just under 5 liters and some stock cars were now no longer speedway eligible, as was the intent. This engine limit was also larger than the standard European and in response Mercer made the 450 cc motor. Duesenburg made a larger engine while Peugeot, Mercedes, Delage, Sunbeam, were still in the fray. With the help of the Wisconsin Engine Company, Stutz designed a 4 cylinder 298 cubic inch motor with 130 horsepower at 2800 RPM, keeping the tried-and-true Stutz transaxle.

American drivers such as Bob Burman, Barney Olfield, and Ralph DePalma purchased foreign cars to compete in the great 1915 Indianapolis 500.

To qualify for the 500 it was necessary to run two laps at a minimum average speed of 80 mph. Consequently, 18 of the original 40 entrants were eliminated but the large capacity foreign cars qualified. The race was exciting with the Stutz contingent of Anderson and Cooper forcing the lead. Tire consumption was a problem, but the engines performed admirably. Because of a tire and mechanical failures, the best the Stutz could do in 1915 was a third and a fourth place (Anderson and Cooper). Stutz’s fortunes were not great in the remaining 1915 races after which Harry Stutz absquatulated competition.

The early history of this car is based around racing automotive pioneer Addison Brown. Born of a distinguished Eastern family, when he finished at Choate his father bought him a seat on the New York Stock Exchange after which he went West to an agricultural school in Davis, California. He sold his seat on the stock exchange and settled down to racing cars and gold mining. Subsequently it appears that he did not do much as far as income-producing work was concerned, but he enjoyed fishing, hunting, and ultimately spent time with his best friend’s son, Franklin Nordhoff Jr., (who supplied this biography). During his mining days he had a mill in Luning Nevada, where he kept many of his cars. It is known that his brother was a Stutz dealer in Santa Monica and this is apparently where he obtained many of his racing cars after they were no longer useful.

The previous owner of this car purchased it many years ago from Addison Brown. At one time it had a Mercer “45” engine installed with a subframe as an engine mount. Then it was equipped with four friction shocks both front and rear. Brown was obviously interested in racing and had both number three and number four of the very rare “45” Mercer motors. He was known to have as many as 7 pre-1917 Stutz autos. We do not know how much of the remaining parts of the body were intact but it is definite that the chassis is from a 1916 Bearcat, with the appropriate serial tag, as far as we can tell. This lack of historical provenance, however, makes this the least defined car in the collection, and apologies are indeed in order.

Correspondence that came with the car claims that sometime in the early 1960s it belonged to famed early racing collector Blackie Shaeffer. A letter from Blackie states, “the Mercer engine that was in my chassis was a racer engine that was owned by Mr. Brown from San Pedro California and was located in the hills above Beverly Hills and a friend bought it for me and had it shipped to me.” Subsequently he obtained the rest of the Stutz car.

We got the car through George Ktsanes as an older restoration. The chassis is original, of the correct wheelbase and intact. The Wisconsin engine is on a subframe, but the drive train is all original. I cannot tell how much sheet metal has been replaced but all mechanical structures are stock.