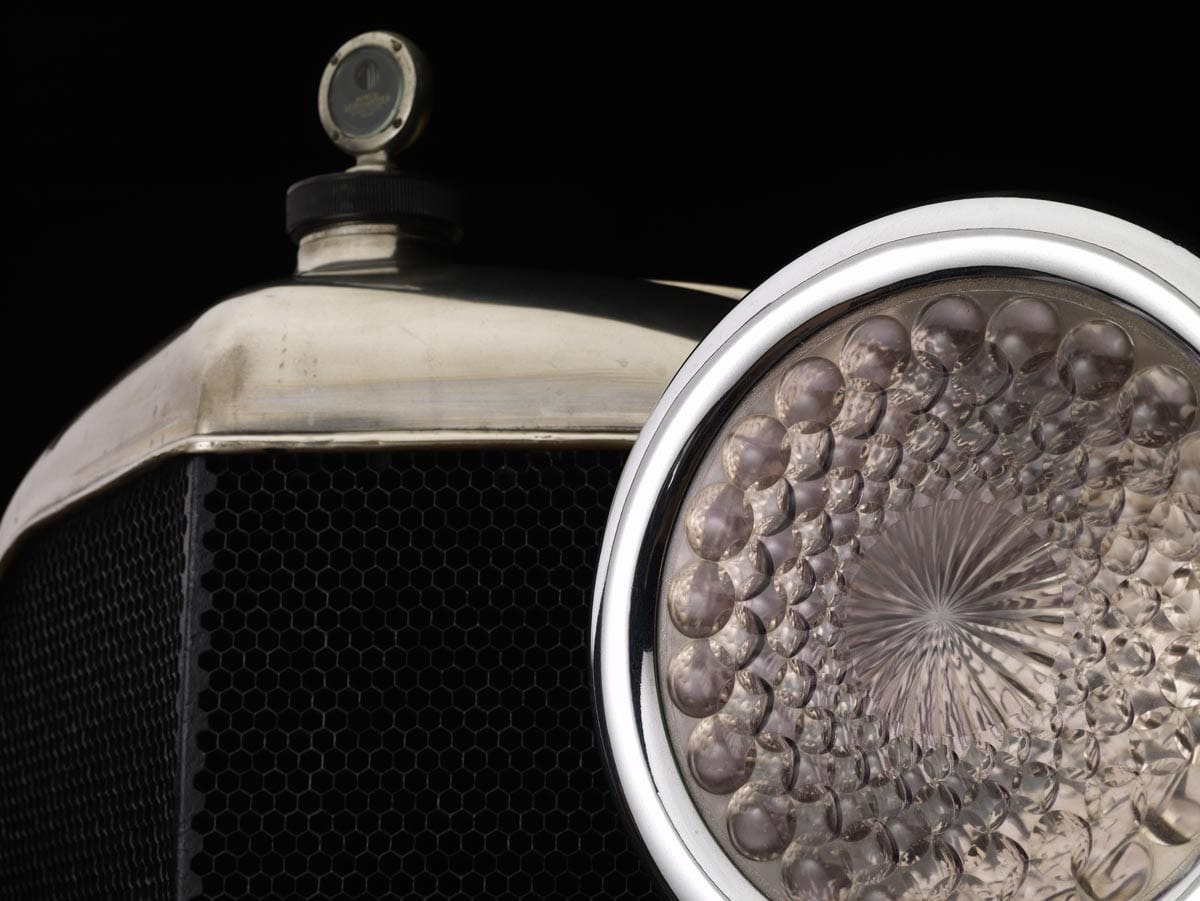 Oakland was one of the few post-WWI companies which marketed their cars for sporting purposes. This car is in unrestored, original condition.

You may wonder why such a car is in with all the beauties we have so far mentioned. We needed a late-teens sporty car to explain our evolutionary theme, but they are damned rare. The Mercer, Stutz, and National were genuine sports racing cars whereas the Oakland, as you can see from the advertisement, was “altogether a comfortable, graceful, powerful car with the speed of a racer–a delight to the man who likes to drive FAST!” Oakland was one of the few post World War I companies who marketed a vehicle for sporting purposes even though not involved in racing. But, as the ad says, they wanted a car that “makes it seem like a thing ALIVE, and fairly thrills you with its eagerness to GO”.

Beyond the desires of the manufacturer, the car itself has little to offer. It has a standard chassis with underslung springs in the rear, 112 inch wheelbase, and a four-cylinder proprietary Northway motor of undescribed power, with a bore of 3 ½″ and a stroke of 5″, Basically a standard passenger car chassis with a cute but disorganized body. It was clear at this point in time that the American manufacturers had not decided how to make a sports car look beautiful.

It was not until the later Paige and Kissel autos that the two-passenger open sporting car incorporated a visually attractive streamlined design rather than the two bucket seats with a tank in the rear paradigm. They advertised that “this motor will, on high gear, carry you at six miles an hour through the city traffic or at 60 miles an hour on track or road”. Not a very impressive car, but for the late-teens, one of your very few choices if you are of a sporting bent.

Never expecting ever to find such a parity, I was quite surprised when the September 23, 2006, Bonhams auction of the Frank Cooke collection sported a “1916 Oakland model 38 speedster”. They did not really have any significant history, and in the only information I could find was gleaned from the collection’s small brochure produced just for this car, a part of which is copied here. the auction catalog writer was unaware of the provenance of this vehicle because the writer assumed that the body was not original. However careful inspection and comparisons with the only detailed photographs of the car (in the brochure) showed that this was a remarkably original automobile.

The leather, for instance, was intact. Speaking with Andrew Reilly of Bonhams convinced me that this was actually the original body and one with many undisturbed features, particularly the leather. I repainted it in the standard yellow, so common for those of a certain age and a certain time who restored sporty cars (viz Mercers, Stutz, Hudson Speedsters, etc). The details as described convinced me that this was a rare gem and the only one I knew to exist. Because the origin of this coachwork was questioned in the catalog, it went for a reasonable price and we now own this awkward, underpowered representation of the inchoate sports car idiom of the dark ages of American sports car design (1915 to 1925).

What a surprise when only nine months later, the RM auction sale of the McMullen collection in Michigan revealed for sale, “which might be the only Oakland speedster in existence.” The catalog gushes “in order to experience the excitement of such a ride, you would have to be the highest bidder on this lot,”. They go on “imagine, owning this car is like laying claim to the only surviving great-grandfather of the GTO, exceptionally well presented, the Oakland speedster is worthy of close inspection on account of its rarity, high-quality and inherent historical importance,”. This car was identical to ours, beautifully restored, and sold for over four times more, but neither deserves the auctioneers’ approbatory hype.